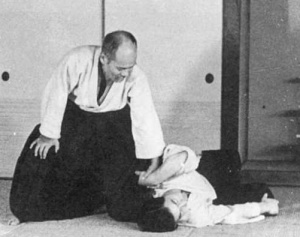 Aikido is a modern Japanese Budo ("Martial Way"), based on techniques of self-defence from centuries-old traditions. It was created by Morihei Ueshiba (1883-1969), known as O-Sensei, or "great teacher". The principle of aiki (spirit of harmonisation), can be understood as taking an an attacker's strength with spherical movement, rather than aggressively opposing them or using muscular strength. 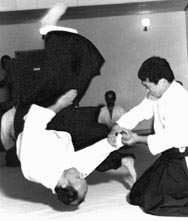 Aikido techniques consist of unarmed self-defence against various armed or unarmed attacks. The attacker is either immobilised through joint locks or thrown to a safe distance. Ukemi, or the practice of receiving, is a vital part of Aikido training, and is practised both as rolling and falling exercises and as part of regular Aikido training with a partner. Although the techniques can be very effective and powerful, and include some painful joint locks and pressure points, they are designed to work through breaking the balance of the partner, rather than damaging their body.

Because of the emphasis on relaxation and the use of subtle movements instead of physical force, Aikido does not demand great physical strength or fitness. However, the natural movements of Aikido lead to a flexible and healthy body, and many people experience a pleasant feeling of well-being during and after classes. Training is generally conducted in a cooperative, rather than competitive, manner, and injuries are rare. There are no tournaments in Aikido, and it is suitable for people of all ages and constitutions.

DISCLAIMER: The content of these pages reflect the views of the SUAC committee only and do not necessarily reflect the views of any other students, the SUAC as a whole, or the University of Southampton. Any copyright breaches contained within these pages are unintentional, and if informed will be removed. The authors can not be held responsible for the contents of and linked pages and any complaints should be directed to the webmaster